Running your company's first Super Bowl ad is a big investment and a major risk. However, Jake Kirsch wasn't gambling. He'd already hedged the investment with a digital marketing plan. It worked and here's why. 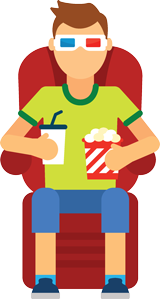 Digital Marketing Went Where the Viewers Are

Instead of assuming their audience was limited to television, Shock Top recognized they had an audience across multiple channels--YouTube being one of the most significant. Their Super Bowl ad wasn't the end of the campaign. It was the middle of a three phase plan of "before, during, and after."

Before the Super Bowl ad, Shock Top created over 90 pieces of content. Some of the content was designed to create context before the Super Bowl, while other content aimed at getting PR before the game. This was especially true of the extended version they released on YouTube before game day.


At the same time, their content package contained pieces to complement the pre-release of their ad. "With smaller, more sharable versions and outtakes, providing plenty of content for [their] fans," they gave their fans the opportunity to engage and share.

Shock Top didn't have to heavily promote their 30-second Super Bowl TV commercial. They had already used YouTube to test 11 different versions of the ad to narrow down which ads they'd want to run after the Super Bowl. The view-through rates (VTR) and brand lift on ad recall helped them narrow their choices to two 15-second cuts.

In addition, they'd used VTR to evaluate their 90-second pre-release teaser. The results? A positive 68-second average. Thus, they already knew their made-for-digital content was going to outperform the TV ad. If viewers love a 90-second ad enough to stick through to 68-seconds on average, it's an engaging ad!

They designed each ad's content to match three qualities.

In addition, they planned for a longer spot for the Monday after the Super Bowl. This extended cut called the "Big Game Ad Review" re-featured Super Bowl Ad comedian T.J. Miller and Wedgehead in "unfiltered" mode. It was on brand and tied to the Super Bowl ad.


The strategy of tying the ad to "the YouTube masthead (homepage takeover)" to drive "engagement with" their "post-game ad review" allowed Shock Top "to reach a massive audience incredibly quickly." They were also able to use YouTube's TrueView ad program throughout their 30-day campaign to accelerate ad views long before Super Bowl ad ran. In other words, they were already firing up traction as a brand before game day.

Throughout the campaign, Shock Top "measured views, clicks, and VTR." They "also ran Brand Lift studies on almost every element of the campaign." Studies on ad recall, favorability and consideration proved their brand was healthier than ever. One of the most impressive results was the dramatic increase in searches on Google for "Shock Top" after they ran this campaign.

They had achieved their goal. Massive increase in brand awareness. According to Fortune, that's the primary reason any brand buys Super Bowl ad time. "One ad research firm estimates that 80% of Super Bowl commercials do not boost sales or purchase intent."

By using a carefully planned digital marketing campaign, Shock Top turned the odds in their favor. Even if their Super Bowl ad had done little more than entertain, they'd ensured they gained the highest traction for their total advertising spend. They leveraged the power digital marketing gives companies to go where a growing number of viewers are in today's market.

PS - If your business or brand could benefit from a video marketing campaign, like Shock Top's Wedgehead, be sure to connect with one of our Growth Managers and find a time to chat.

Sources: thinkwithgoogle.com | fortune.com
Unless otherwise noted, all quotes in this post are drawn from this article.

Next Post Brand Refresh: The Benefits of Cohesive Logo Design