Inbound 2017: A Recap From PatraCompany

"I don't call it failure, I call it feedback." These words from former tennis star Billie Jean King rang through the Boston Convention Center and perfectly encapsulated what seemed to be a common theme throughout the 2017 Hubspot Inbound Marketing Conference: embracing failure.

Starting from humble beginnings in 2008, Inbound began as a marketing conference run by industry giant Hubspot and has grown to accommodate over twenty thousand visitors from some 90 countries. Featuring a list of speakers and educators made up of some of the greatest minds in the tech and marketing industries - combined with a diverse group of pop culture icons - Inbound is much more of an "event" than a conference, per se. In the past Inbound has featured icons like Alec Baldwin, Serena Williams, Gary Vaynerchuk, and Michael Strahan, yet even those names couldn't compete with this year's star-studded lineup. Names like Pixar CEO Ed Catmull and Slack CEO Stewart Butterfield shared the stage with celebrities such as Michelle Obama, John Cena, Mario Batali, and Judd Apatow.

While the conference began in 2008, this was the first year PatraCompany has been able to send the entire company down, and Hubspot's largest conference to date didn't disappoint. 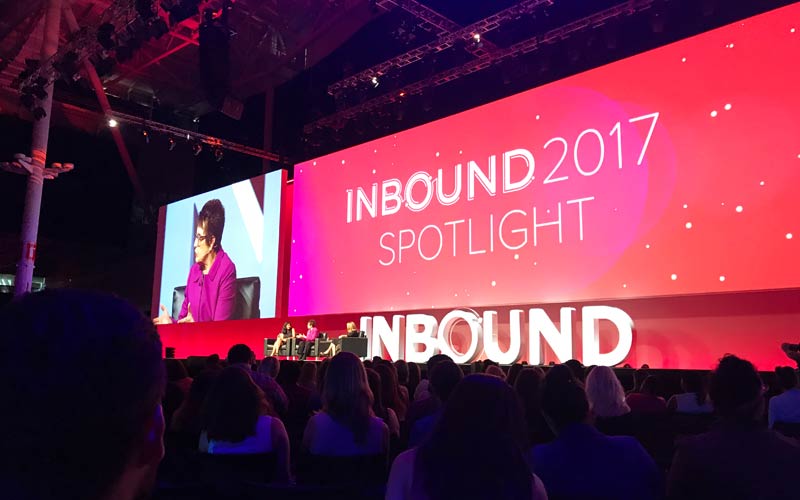 Brene Brown, a TED Talk veteran and author of three #1 New York Times bestsellers, kicked off the first night of Inbound 2017 with a keynote speech centering around vulnerability and sense of belonging. While technical in its origins, Inbound does a great job at including speakers who may not have the technical understanding of inbound marketing, but instead are meant to inspire creativity and create conversation. Brown did just that.

Brown was just one of the many best-selling authors on deck at Inbound. Adam Grant, professor of management in the revered Wharton School of Business at UPenn and New York Times bestselling author, led a rousing spotlight session centered around concepts from his books 'Originals' and 'Give and Take'. Grant's psychological look at success and what makes the people who achieve it different from everyone else had valuable insights on how culture in the workplace can impact performance. Grant's Tuesday session was just one of the highlights of a packed day, however.

Tuesday's keynote was led by Refinery29 co-founder and Maine native Piera Gelardi. Gelardi illustrated just what successful content marketing can achieve for brand recognition and provided a great case study with her own website. Refinery29 began as a New York City fashion-focused guide in 2005, and in just 11 years are bringing in 27 million visitors each month - which can be attributed to Gelardi and her cofounders' unique eye for creating captivating content. Gelardi stressed the importance of "being the best you", and how being afraid of failure can hinder your ability to create relevant content.

The keynote speakers and spotlight sessions were the flashiest aspects of Inbound 2017, but they were just the tip of the iceberg when it came to the conference's offerings. Inbound's hundreds of breakout sessions were where the technical aspects of the conference were able to shine. From web developers to social media experts, Silicon Valley C-Level executives to artists and authors, the breakout sessions offered patrons plenty of options to explore their interests. The PatraCompany team took advantage and spread out to a variety of classes ranging from social media sessions focused on branding with Instagram and Facebook video to classes focused on sales and analytics in marketing led by C-Level executives from tech giants like Google and Moz. 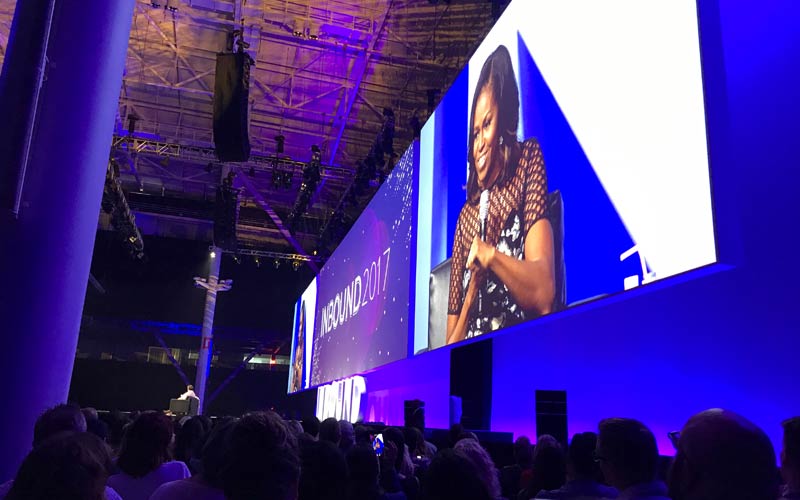 Wednesday was dubbed as the "biggest day in Inbound history" and featured the most anticipated speaker of the week: Michelle Obama. Guests lined the streets outside of the convention center hours before the former first lady was slated to speak and the buzz carried over to her keynote session. Drawing the biggest crowd of any keynote speaker by far, the Chicago native showed the poise and charisma that makes her such a compelling figure and spent her hour on stage in an interview-type Q&A, bouncing around between reflecting on her time spent in the White House and offering valuable insight on graciousness and failure.

Obama wasn't the only big name to take the stage on Wednesday. Billie Jean King took the stage with current Gixo CEO Selina Tobaccowala in a session that focused on equality in the workplace. It was during this spotlight session where King stressed the importance of looking at failure as feedback. 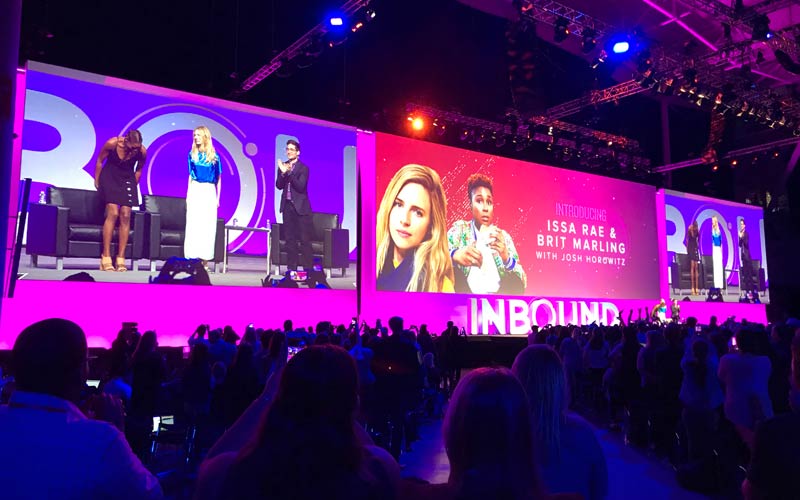 HBO star Issa Rae and Netflix director/actress Brit Marling hammered this point home in their crowd-favorite spotlight session. Marling, star and director of the critically-acclaimed Netflix series The OA, talked about how she failed for seven years in Hollywood, struggling to find work and make ends meet before breaking through with her directorial debut at the Sundance Film Festival. Marling encouraged listeners to "double down on themselves" when encountering failure not just in marketing, but in life. Rae, the creator and lead actress of the HBO show Insecure, served as a great case study for what identity and brand management can accomplish within marketing. Rae took her modestly-begun Youtube series all the way to a hit television show by embracing her identity and staying true to the market she wanted to hit.

The consensus favorite among the PatraCompany team on Wednesday was celebrity chef Mario Batali. Batali's up-front candor and humor combined with interviewer and Bravo TV host Andy Cohen's ability to think on his feet made for an entertaining session that also provided a couple surprising marketing insights. One point Batali touched on was creating content surrounding something that doesn't provide instant gratification. Viewers of his show and countless specials he's put on aren't able to feel the instant gratification of trying one of the meals he's cooking on television or getting locked into a suspense or comedy-driven plot that most shows will have. Instead, he's had to supplement and diversify to turn himself into a brand, which he's done with the way he portrays himself and his countless cookbooks and restaurants. 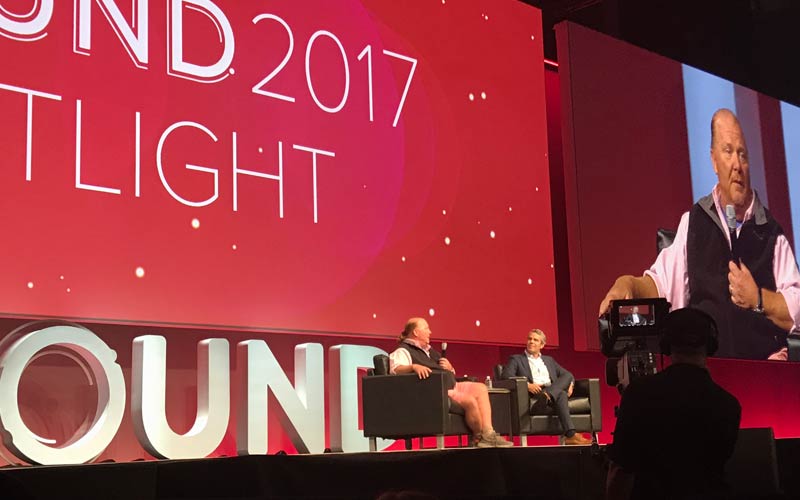 One of the biggest events of the day was the keynote from HubSpot founders Brian Halligan and Dharmesh Shah. Split up into two sections, Halligan's speech was marketing-focused, talking about how to succeed when transitioning from a start-up to a "scale-up" - a topic that aligned well with many people in attendance. Shah, on the other hand, handled the technical aspects of the new technology HubSpot is rolling out. With a topic that very easily could've wound up dragging on, Shah kept the audience engaged with his dry humor, genuine personality, and stories of hanging with Elon Musk.

Pixar CEO Ed Catmull led an interesting keynote Thursday morning on the evolution of ideas and team culture. Catmull specifically talked about one of Pixar's top movies, Up, and how it took years of failed ideas before they finally came to the final plot. What started as a concept of two brothers in a floating kingdom falling to Earth eventually became what the current film is after several more failed scripts in between. In fact, the only real crossover between the initial script and final movie was the bird, Kevin. But Catmull said those failed concepts and scripts were essential to the film's finality. Watching his team fail over and over again wasn't disheartening; like King said, it was feedback. They needed to see those failed ideas to know what a successful one looked like.

For all the successes of the conference, HubSpot didn't hit on everything. The Partner Day, a brand new addition this year that gave HubSpot partners a sneak peek at some of the new features Hubspot is rolling out, largely fell flat and felt disingenuous compared to the rest of the conference, and it'll be interesting to see if they decide to bring it back in the future.

All in all Inbound 2017 lived up to the hype and proved to be a great educational experience. Many of the speakers at Inbound 2017 talked about the importance of culture in the workplace and how it can make or break the success of a business. And above all that's what the conference served as; a great team-building opportunity filled with knowledge and inspiration to bring back and put into action.