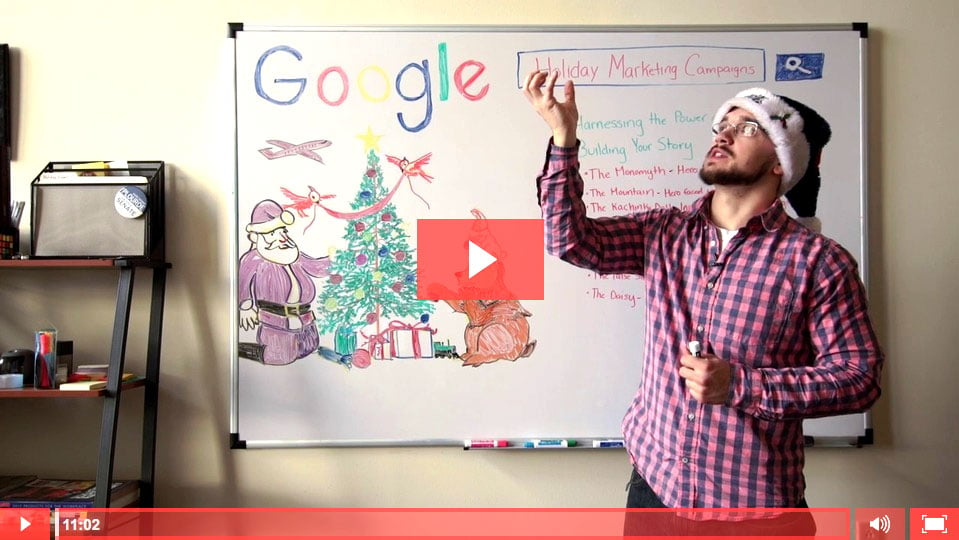 Whether you’re focused on a holiday or celebrating an anniversary, stories engage. As Ann Handley says in Entrepreneur, "The best stories are specific enough to be believable but universal enough to be relevant."

John Lewis - The Bear & The Hare

For example, the John Lewis Christmas Advert 2013 video, The Bear & The Hare, has raked in over 16 million views. What made it successful? A story most of us can relate to—loneliness, insecurity, fear of missing out, rejection. Our hearts are joyful when the story turns these things into hope, friendship and inclusion.

This 7 million campaign built upon previous years’ successes by choosing a message that “pays tribute to all of our most memorable childhood Christmases." The Telegraph saw this as “a move by the retailer to position itself as owning Christmas in the UK."

The Marketing Director for John Lewis, Craig Inglis, told The Telegraph they’ve been building on the theme of how important it is to find the right gift for several years. The choice of animation was deliberate. They wanted “to evoke nostalgia and build anticipation ahead of Christmas."

As proof of building on previous success the John Lewis 2015 Christmas Advert, #ManOnTheMoon, was uploaded on Nov, 5th 2015 and already has over 20 million views as of December 2015. The video has received 4 million more views in roughly a months time than The Bare & The Hare has gained in 2 years.

One of the reasons that it has experienced instant success has to do with social media growth. According to Kadie Regan, at Social Media Today, social media users have risen by 176 million in the last year alone. Watch the #ManOnTheMoon video and comment below to let me know which one stirred up your emotions more. For me it was the #ManOnTheMoon.

John Lewis isn’t the only company to tap into nostalgia. West Jet went viral with its Twas a Night Before Christmas’ ad in 2013. It’s had over 42 million views (as of December 2015).

What made this campaign so successful? According to Vidyard’s Jennifer Pepper, “WestJet crafted an experience for people. They “succeeded because the storytelling resonated with real people. From the whimsical, purple-clad Santa who knows everyone’s name to the Night-Before-Christmas-esque-narrator, WestJet branded an experience evoking emotions from childhood. Moreover, the main takeaway is that they care.

Behind the scenes, over 150 WestJet employees volunteered their time to execute the filmed event. Over a dozen cameras had to be hidden. Cooperation with three airports had to be secured. Yet in the end, the primary takeaway was the same. WestJet planned it carefully and created a story that most people have resonated with. Only 6,573 people have given the video a thumbs down on YouTube. That’s 0.03% compared to the 209,769 who’ve taken the time to give the video a thumbs up (when this was written).

There’s a lesson to learn from WestJet though. While their 2013 video has had an extra year to gain viewers, their Twas a Night Before Christmas’ 2014 video hasn’t done as well. This is possibly because they set their event in the Dominican Republic, so all the Christmas wishes are in Spanish. English speakers have to read a translation. It’s more likely that the first time is always the one with the most impact.

As Handley says, “I have a love-hate relationship with real-time marketing because many companies spend too much time and effort trying to replicate a famous tweet [or in this case, an old success] rather than creating marketing that’s truly innovative. If you do find something has worked very well for you, expect that campaigns that copy rather than innovate will lose their traction the more often they are used as a pattern for success.

Harnessing the Power of Story

So how do you harness the power of story to build successful holiday marketing campaigns? Begin by recognizing your stories must be unique. They must be chosen for the person you want to listen. Know who you are sharing the story with and what makes the story relevant.

As you map out your video, write a script that is conversational. Avoid formality, especially with holiday-focused marketing. Use words an eighth grader understands (though use teen lingo only if that’s your audience).

Also, focus on the story from your customer’s perspective. Stories built around people just like themselves will do a far better job of selling’ than those built around how great you are. This could be one reason WestJet’s views have slipped. The story begins to feel like they’re bragging about their generosity the second time around.

Many of the classic story-telling techniques below are excellent for building a compelling story and taking your holiday campaign from good to great.

You’ll recognize this story structure by the quest. There’s a hero faced with a challenge. He or she succeeds (or fails) yet learns something along the way. Sparkol’s Ffion Lindsay says this story structure shows “the benefit of taking risks" and demonstrates “how you learned some newfound wisdom." You see this technique in The Bear & The Hare.

This story building technique tweaks the monomyth by including more than one challenge. It’s effective for building rapport with customers who are facing challenges and are seeking proof there’s a way to overcome them.

For video, it’s difficult to make this story technique work with more than three nested dolls. You go from the outer doll to the innermost doll and then put each one back into it’s place. As Lindsay describes it, the Russian Matryoshka doll technique “works a bit like a friend telling you about a wise person in their life, someone who taught them an important lesson. The first [doll is] your friend’s story, the second [doll is] the wise person’s story. At the center is the important lesson."

Use the Russian Matryoshka nesting doll when you want to share the process surrounding inspiration or reaching a conclusion, or to create analogies so a concept is easier to understand.

There’s a contrast between reality and our dreams. This technique draws attention “to the problems we have in our society, our personal lives, our businesses. Your video storyline “creates and fuels a desire for change in the audience by lifting up an ideal." Think Martin Luther King’s “I have a dream" speech. There’s an element of this technique in the WestJet videos.

With this story style, you drop your viewer into the point of greatest conflict, and then you show your viewers how they got there. It’s a challenging technique because you want to keep your viewers engaged. They have to continue asking questions. It’s a great technique for grabbing attention quick, but keep it short, Lindsay says. “If you string it out too long your audience will get frustrated and lose interest."

When your story has more than one equally important facet, which culminates in one key message, use this technique. It’s a great way to show the benefits of teamwork or symbiosis. Focus on how each story comes together to produce the message.

With this technique, your viewers think you’re telling a story that’s going to have a predictable ending. Except, you interrupt the story to start over, and the ending is far from what they expected. There is some risk with this method, because you must have an engaging initial story. Otherwise, viewers may clock out before you’ve made it to the interruption.

Do you want to attract different types of people? Then consider the daisy. Imagine that each petal is a unique story. Notice how each petal is attached to the disc. There’s a core message, yet each story is unique from all the others. It’s the main idea that unites them.

Successful holiday marketing campaigns don’t happen by accident. However, they don’t have to cost millions. You can deliver a carefully planned story with simple equipment and an inspiring story.

PS - If you're looking to create a marketing campaign in the coming months, similar to the John Lewis or WestJet campaigns, then be sure to visit our video marketing starter guide page. The starter guide walks through the basics of creating effective video adverts for any brand! 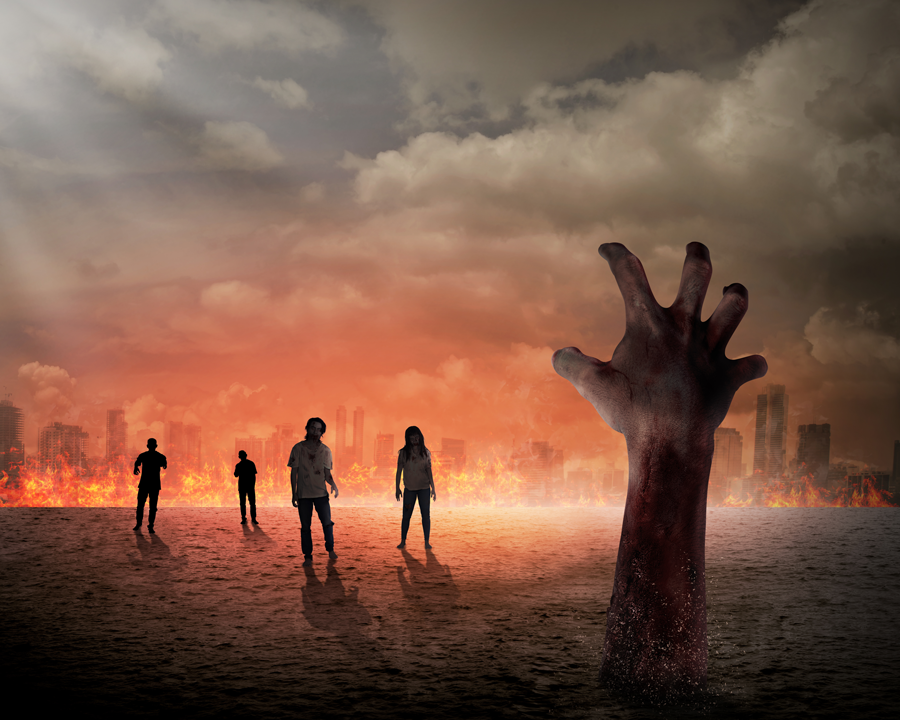 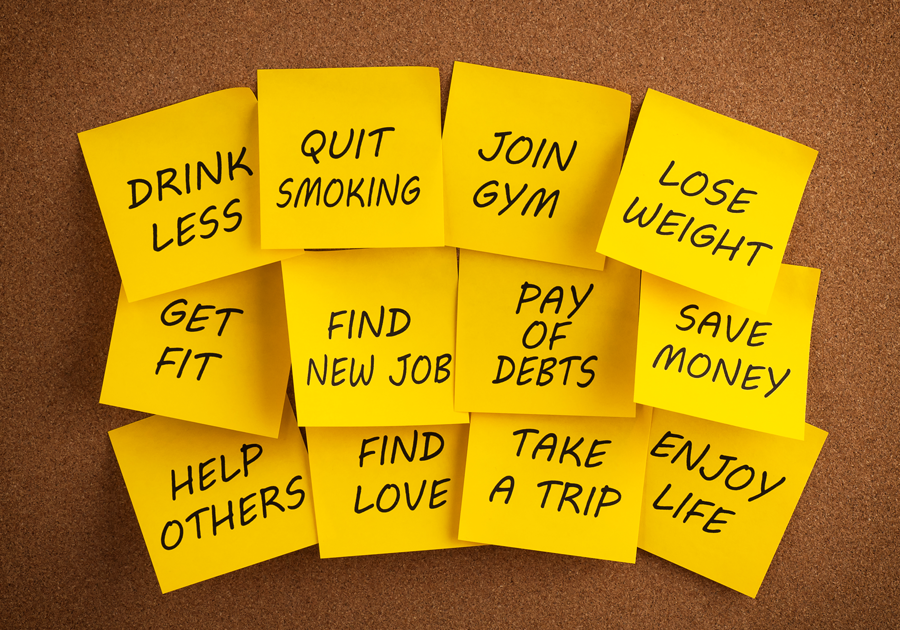 Next Post One Social Media New Year's Resolution You Should Make