“People often behave differently when browsing on a phone versus a desktop,” says Tim Jensen in his SmashingMagazine.com article Targeting Mobile Users Through Google AdWords. Little has changed in the 2+ years since he expressed this opinion except this: More people are beginning and ending their searches on their mobile devices.

However, there is one thing Jensen said back then that has changed significantly. Google has again reversed itself. Until early 2013, AdWords allowed mobile targeted campaigns. Then it rescinded this option, forcing PPC managers to develop strategies which they hoped would reach across multiple devices. Now, Google’s promoting mobile specific advertising campaigns once again.

What’s precipitated this reversal? All that data Google collects on browsers. Can you blame the search engine giant from wanting you to be successful in your advertising? After all, your success is their key to ongoing profits. Thus it pays to learn what you can about how to leverage AdWords for mobile in tandem with having a website that’s compatible with Google’s mobile-first algorithm. At the same time, let’s ensure your expectations are reasonable.

Should You Put Significant Ad Spend into Mobile AdWords Campaigns?

Consider this information collected by Smart Insights. Consumers use mobile-specific apps 90% of the time. This means they prefer interacting with businesses through dedicated apps, once that business has become important to them. For example, a mobile customer is far more likely to interact with Dick’s Sporting Goods store through its app than his or her phone’s web browser. Not all of these apps are part of Google’s massive Google Display Network—a 2 million strong publisher and app network.

At the same time, if you aren’t focusing your ad spend on mobile, you will be missing a significant opportunity. “In 2015 mobile ad spending” accounted “for 49% of digital ad spending.” By 2019 eMarketer projects mobile ad spend will need to be 72.2% of your digital ad budget if you want to be where your audience is.

Google says you need to learn how to set the right mobile bid. That’s only possible with time. At first, bidding is a calculated guess.

As you run Shopping campaigns, Google gathers device-specific data. The resulting Devices report helps you analyze mobile performance and compare it with desktop and tablet performance. When you see a campaign is doing well on mobile, you raise your bid adjustment modifier. This means you win more views.

When performance fails to meet expectations, there are several things to check.

Working with an experienced AdWords account manager can reduce the ‘risk’ associated with that initial guess. It can also ensure you’re working with someone who knows what initial performance results are really telling you.

Google has a tool which can help you “get more value from your budget.” It’s called Enhanced cost-per-click (ECPC). ECPC works by tracking clicks and evaluating which ones lead to conversions.

If you turn this feature on, you might pay up to 30% more for a click Google’s algorithm expects to convert. However, that same algorithm could reduce your click fee by up to 100% if its evaluation suggests a click is unlikely to convert.

Do you feel uncomfortable with handing this kind of power over to a company that has a vested interest in charge you more for advertising? Google’s added the ability to incorporate your own mobile device bid adjustments into their ECPC equation. Google says this is especially important when in-store visits aren’t tracked with the AdWords Conversion Tracking tag. 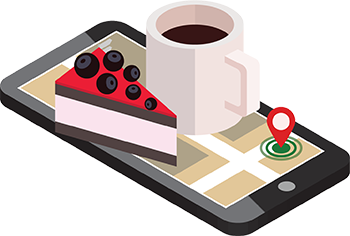 Do you have a physical store? Then Google’s Geographic Locations report is important. It will help you correlate store visits with your mobile ads. You can also target your eCPC so your ads show more often when a mobile user is near one of your locations.

Local Inventory Ads are another option you may want to consider. Many brick and mortar stores use them to attract mobile shoppers into the store. If you have what a shopper is seeking, this type of ad can be magnetic.

A shopper’s pulled up several options for pizza in the vicinity. What makes them choose you instead of the competition? It could be a Merchant Promotion you’re running. Or it could be the raving Customer Reviews.

Other strategies Google suggests for differentiating your mobile Shopping ads from the competition are Product Ratings or the Local Inventory Ads we’ve already mentioned. Your goal is to ensure your ads don’t blend in with everyone else’s.

No brainer? Yes, and fortunately, that’s easier than ever before. Google’s no longer demanding you design your ads to match specific size requirements (even though there’s still conflicting information about this in the AdWords answers section). Instead, Google’s giving advertisers the option of delivering photo and text ads responsively.

This can make ads seem less intrusive “because they mirror the appearance of native articles,” says Melissa Anthony of New Jupiter Media. However, there is a downside to the new approach. Your control over how an ad looks is now in Google’s hands. Some elements may be dropped, says Anthony, so make sure your ad contains highly relevant headline text. In this way if the secondary headline gets stripped, you’ll see have an effective ad.

Now that you can target your desktop AdWords campaigns separately from your Mobile AdWords campaigns. It’s in your financial interests to do so. If your advertising budget only allows you to focus on one AdWords campaign, it’s easier to make a mobile campaign perform on desktop than the other way around.

Ultimately your goal should always be a positive user experience at the end of the click. It’s the wise way to ensure your AdWords investment delivers. If you need help with your Google Adwords account reach out to one of our AdWords experts using the button below.

Next Post Less is More: Rethink Your Advertising Strategy